Most of Gen Z — the generation born after 1995 — still aren’t old enough to buy alcohol, get married or hold their first job. But they’re already flexing their consumer muscles. More than 70 percent of Gen Zers surveyed for the NRF/IBM “Uniquely Gen Z” study released earlier this year say they influence family spending on everything from electronics and vacations to everyday household items.

“Children need to understand that this is their home too, not just their parents’ home. They use much of the stuff we have in the house, and I want it to be appropriate for them, not just us.”

According to a recent InfoScout poll conducted for NRF, it’s not just the kids talking — it turns out parents agree. Of the more than 1,000 parents of Gen Zers surveyed, 67 percent said they get their child’s input before making a purchase; 59 percent won’t buy an item if their child does not approve. (The InfoScout poll asked about purchasing behavior related to apparel, e-commerce, entertainment, fast-moving consumer goods, restaurants and specialty retail.) NRF’s research team identified three trends from InfoScout’s analysis to help retailers understand exactly how and when these young U.S. consumers impact the family wallet.

When children are expected to be seen and heard
Today’s parents view their Gen Z children as full-fledged members of the family who deserve a say on items such as toys or apparel that are specifically for them. Parents will also involve Gen Z children in decisions that impact the whole family: Nearly half of survey respondents said they will ask their child’s preferences before deciding where to eat out (47 percent), what entertainment to purchase (44 percent) or what groceries to buy (37 percent). One in three will ask their child about an electronics purchase. 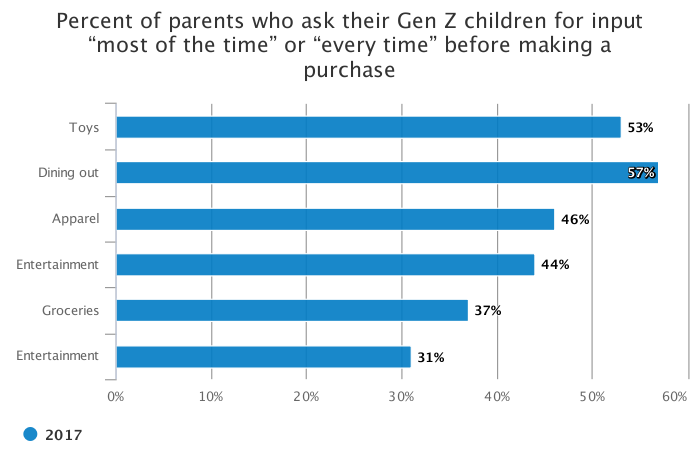 The first step on the new path to purchase: Checking with the kids
Not only does Gen Z participate in purchasing decisions, they’re involved in shopping from the start. An overwhelming majority of respondents — 85 percent — said they consult their children during the research and planning phase of a purchase; 91 percent will get their child’s input when they’re actually choosing a product. 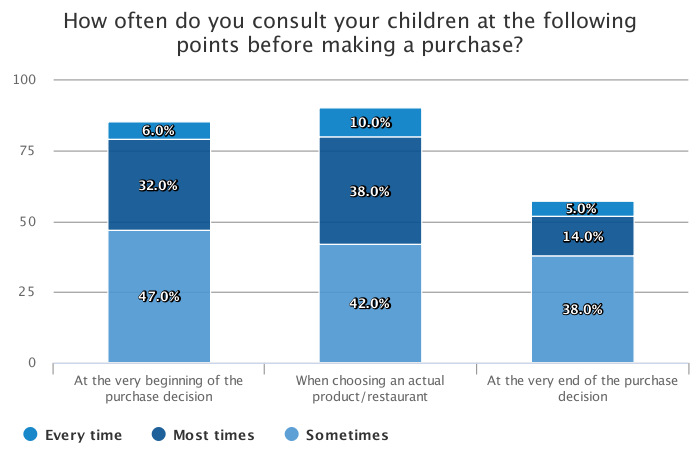 Gen Z may be weighing in early because they aren’t doing the actual shopping. Data from InfoScout’s purchase panel indicates that Gen Z is present for only one of every four shopping trips, giving retailers and brands limited opportunity to engage young consumers in person. This increases the pressure to build loyalty with Gen Z on other channels; popular brands like Chipotle and Nike are paying attention to this trend with targeted campaigns on platforms like Snapchat and Instagram. Chipotle recently launched a six-episode iTunes series called “RAD Lands” to educate Gen Zers between the ages of 7 and 10 about healthy food choices and sustainable sourcing. The unbranded series allows Chipotle to share its values with a whole new generation of consumers.

Families that shop together, spend more together
While it’s critical to connect with Gen Z virtually, it may be in retailers’ interests to encourage more family shopping trips. InfoScout’s data shows that when a Gen Z child is along, a household spends $6 more per shopping trip on average.

“Regardless of age, when a Gen Zer is present on the trip the family spends more,” said Bob Goodwin, InfoScout’s practice leader for attribution, noting that the effect is even more evident at certain types of stores. “At club or wholesale retailers like Costco and Sam’s Club, we see families spending up to $12 more when their child is present. We know from the survey results that kids are most engaged when the family is picking out products, and here we see that directly translating into the dollar value of the trip.“

Some retailers are taking note, with stores designed to cater to the whole family. In 2016, DSW announced that it was rolling out DSW Kids departments to more than 200 locations and adding features such as wide aisles to better accommodate strollers. DSW’s open-sell format also makes it easier for young consumers to interact with the products and pick out favorite colors and styles. IKEA takes a slightly different approach, offering free childcare in an area called “Smaland” and giving parents the chance to browse for household furnishings or grab a bite to eat.

The time to engage with Gen Z is now. Retailers that wait until this generation is old enough to spend their own money will be missing out on their full purchasing power. Learn more about the trends and develop a better understanding of young consumers: Download the NRF/IBM “Uniquely Gen Z” report.