Retailers made Black Friday irresistible for consumers with great deals, online and in-store

WASHINGTON – Strong deals and promotions encouraged more consumers to shop over the holiday weekend. More than 154 million consumers will shop over Thanksgiving weekend, up from 151 million shoppers in 2015, according to the annual Thanksgiving weekend results survey released today by the National Retail Federation and Prosper Insights & Analytics.

Average spending per person over Thanksgiving weekend totaled $289.19, down slightly from $299.60* last year. With an average of $214.13 specifically going toward gifts or 74 percent of total purchases.

“It was a strong weekend for retailers, but an even better weekend for consumers, who took advantage of some really incredible deals,” NRF President and CEO Matthew Shay said. “In fact, over one third of shoppers said 100% of their purchases were on sale.” 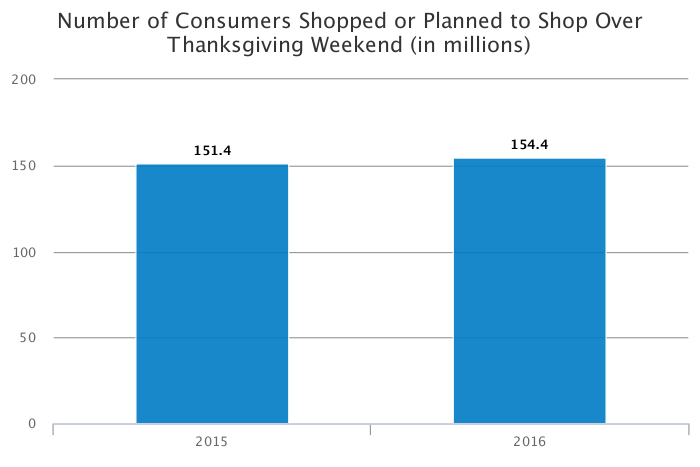 When it comes to where consumers shopped over the weekend, the survey found that 44 percent went online and 40 percent shopped in-store. The most popular day to shop online was Black Friday, up 1.3 percent from last year to 74 percent, followed by Saturday (49 percent), Thanksgiving (36 percent), and Sunday (34 percent). And, of those that shopped in store, 75 percent shopped on Black Friday, up 3.4 percent from last year, 40 percent on Saturday, 35 percent on Thanksgiving and 17 percent on Sunday.

As far as when people showed up in-store on Thursday and Friday, the survey found nearly three in 10 shoppers (29 percent) headed out after 10 a.m. on Black Friday, up from 24 percent last year. Less than 15 percent of consumers arrived to the stores by 6 a.m. or earlier on Black Friday. Early Thanksgiving Day in-store shopping dropped by 19 percent with only 7 percent of consumers heading to stores before 5 p.m. – while shopping that day itself was up one percent. 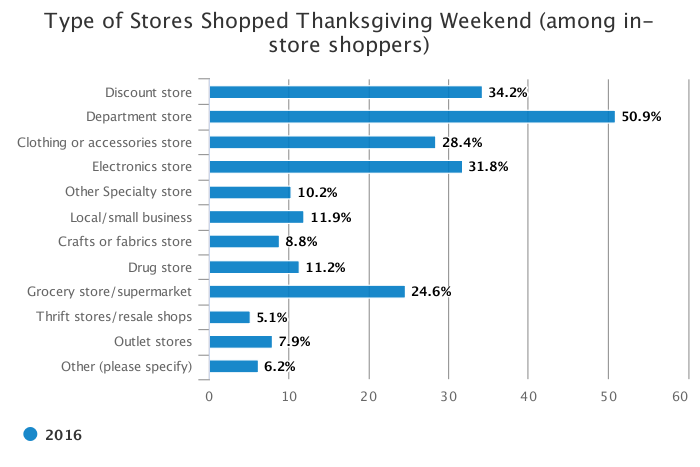 “With mid-season shopping behind us, it’s not too late for retailers to tweak their online and in-store strategies to help increase traffic and see a big payoff during the last few weeks of the holiday season,” Shay said.

Millennials (ages 18 – 34) continue to drive the increase in shopping during Thanksgiving Weekend. Eight in 10 shopped over the weekend, of which 25-34-year olds shopped the most in store (56 percent) and online (62 percent).

“Millennials are keeping retailers on their toes when it comes to Thanksgiving weekend shopping not just for their friends and family, but also themselves,” Prosper’s Principal Analyst Pam Goodfellow said. “However, Millennials are not the only ones taking advantage of great promotions, today’s consumers, across ages, are savvy about when and where they shop.”

The survey found that of those that shopped in store, 51 percent shopped at department stores, 34 percent at discount stores, 32 percent at electronics stores, 28 percent at clothing or accessories stores, and 25 percent at grocery/supermarket stores. 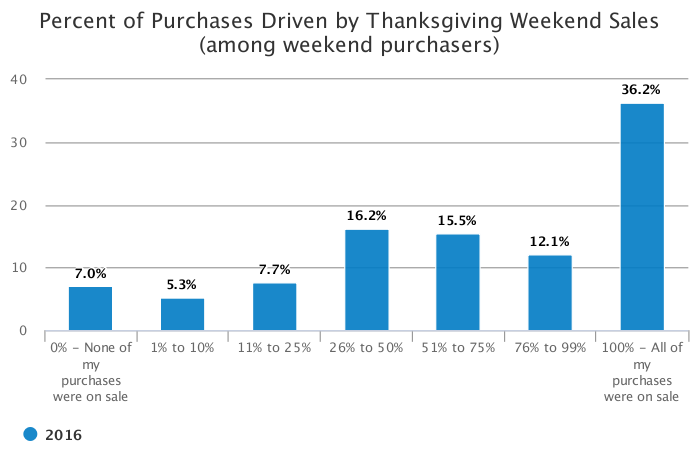 According to the survey, 56 percent of smartphone owners and 53 percent of tablet owners used their devices to assist with weekend shopping activities.

The survey, which asked 4,330 consumers about Thanksgiving weekend shopping plans, was conducted November 25 - 26 and has a margin of error of plus or minus 1.5 percentage points.

Full data results will not be published on NRF.com. News media and analysts who require additional information can contact press@nrf.com.

*NRF’s 2015 Thanksgiving weekend spending is not comparable to 2014 survey as the methodology has changed.

About Prosper Insights & Analytics
Prosper Insights & Analytics delivers executives timely, consumer-centric insights from multiple sources. As a comprehensive resource of information, Prosper represents the voice of the consumer and provides knowledge to marketers regarding consumer views on the economy, personal finance, retail, lifestyle, media and domestic and world issues. www.ProsperDiscovery.com